One of the main themes that ran through many science fiction films of the 1950s was the combined fear of nuclear war, nuclear explosions, and fallout. This atomic fear is one large terror that haunted the Cold War world and was developed in many ways in science fiction films.

One such expression was in the advent of the giant bug movies, which addressed the question of what might happen to  the world after radiation had somehow been released either through detonation of weapons or by accident. In Japan, the consequences of having been the only nation to have suffered the devastation of nuclear bombs, saw the emergence of giant monsters like Godzilla, often seen destroying Japanese cities–a very direct metaphor for nuclear explosions. In America, a similar motif was seen in the proliferation of Giant Bug movies.  This might be considered an early example of ecological concern in cinema. 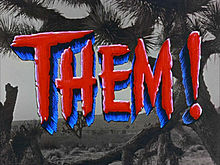 Them, a 1954 production by Warner Bros, starred James Arness and James Whitmore. In the beginning of the movie, a little girl was found alone and traumatized, saying only “them, them.” The girl was rescued, but during the investigation, other people were found who have been killed, and the perpetrators were discovered to be giant ants.  The monsters were created when normal ants came upon sugar that had been irradiated by atomic weapons testing.  They reached the height and size of small military tanks and were ferocious killers and hunters.  This film made Americans think about the potential risks from insects that would normally have been viewed, at the worst, as mere pests at picnics.  Radiation had the capacity to distort they way we  interacted with the world.

Eventually, the creatures were hunted down and destroyed by the use of flame-throwers.  As would be the motif in most of the giant bug movies, the world was saved by using technology against technologically-created creatures.  At the conclusion of the movie, a warning was given in solemn tones that we have entered a new world in the atomic age, and we have to be aware of its dangers. These are themes that would be repeated frequently in other giant bug movies.

If you have not seen this one, it is worth a look.  It may not be the best film of all time, but it does introduce important Cold War themes into science fiction cinema. These are themes which frightened many people.

Seeking happiness in the psalms of life......

Author of Horror, Fantasy, & the Weird

Writing to be Read

Happiness is contagious, spread it.

The answer to the age old question, “what the hell is wrong with you?”

Webb Blogs/ Ocd and Me

Life With OCD, Anxiety, Panic Attacks, And Recovering from Addiction.

Free form of poetry. There are no limits.

Stories and Recipes from the past and the present.

A network of individuals and groups in Palo Alto, California, committed to 1) building community 2) encouraging local resilience to cope with peak oil 3) reducing carbon emissions to cope with climate change

Trust and Believe In The Unseen

"This world is but a canvas to our imagination"

I'm a Doctor with so many random thoughts, so I decided to blog.

The world according to RedCat

Musings on life, love, and healing past trauma

Feel the fear and do it anyway.