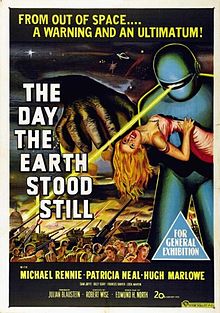 The Day The Earth Stood Still (1951) was a brilliant science-fiction film that set the standards, in many ways, for other following films.  One of the great strengths of the genre of science-fiction as well as horror and fantasy is its ability to comment on direct issues in contemporary society.  In this 20th Century Fox film, the director, Robert Wise uses the arrival of an alien spaceship on earth as a cautionary message about the potential of the human race to cause its own self-destruction through atomic warfare.

The core plot element is that beings from advanced civilizations on other planets have found people on earth have developed both nuclear weapons and a space program. They have sent an emissary, Klaatu, played by Michael Rennie, to deliver a gift and a warning to the people of Earth.  The gift, a small box, was destroyed by a frightened soldier who thought it was a threat. In reality, it was a device that would have allowed humans to study the universe. With the gift gone, what is left is a warning that if human beings insist on bringing their atomic weapons and violence into space with them, then earth and its inhabitants will be destroyed utterly. This message is a quietly subversive challenge through what was seen as just a movie to the nuclear states of the world.

A staple of science-fiction, both cinema and television is the robot.  This kind of machine will figure into film in many ways from the earliest days to recent film.  The Day The Earth Stood Still has such a machine in Gort, a robot that serves as an aide  to the alien Klaatu.  Earth people view it as a threat, as they do everything alien, which is yet another point to the movie.  Xenophobia and bigotry, unfortunate human capacities, were at the forefront of American society in the late 1940s and 1950s.  If someone was different from the so-called norm, then they were somehow bad and immoral.  This will be the main point of the next movie I will examine in this series: Invasion of the Body Snatchers.

The Day The Earth Stood Still was a critical success and has been named by several film organizations as one of the most important films of American cinema.  If you have not yet seen this movie, and I am NOT talking about the remake, then I recommend it highly.